Covid, the 2021 Olympics, and Athlete Selection

Click here to view a PDF version of the article.

The announcement this weekend that Japan will ban foreign spectators from the 2021 Olympic Games in Tokyo is but the latest curiosity of the 32nd Olympiad, due to begin on 23 July. However, long before this most recent announcement, British national governing bodies (“NGBs”) and selection committees have been grappling with difficult decisions on athlete selection, against the strange and unprecedented background of the Coronavirus pandemic. Which criteria should determine selection? How should pre-pandemic form, and results, be factored into decision-making? And – more practically – how can determinative pre-Games events safely be staged when government restrictions remain in place, if at all?

The days of opaque (or non-existent) selection policies for GB Olympic sports are now a thing of the past. The professionalisation of GB Olympic Sport, and the step-change in financial support (via the National Lottery and taxpayer funding)[1] has resulted in selection regimes, and policies, which are – generally speaking – now readily available for inspection and widely publicised. These inevitably vary from sport to sport and will often combine a number of objective and/or subjective criteria. British Athletics has, for instance, traditionally selected based on performances at the British Athletics trials, staged close to major championships (with the first and second-placed athletes who achieved the relevant qualification standard gaining automatic selection, and – if applicable – a third place determined by a group of selectors). British Sailing, by contrast, has traditionally involved selections many months in advance of the Olympics, by a committee of selectors, based on a series of specific selection criteria.

For British Olympic selection, the trend in recent years has increasingly been to confer exclusive jurisdiction on Sport Resolutions: a UK-based independent not-for-profit dispute resolution service, established in the wake of Diane Modahl’s notorious and protracted legal dispute with the British Athletics Federation (“BAF”) in the mid-1990s.

The grounds upon which NGB selection decisions can ordinarily be challenged were set out in Belcher v British Canoe Union (SRUK, 5 July 2012), reflecting the fact, in the vast majority of cases, it will not be for the appeal panel to review the merits of a selection policy or decision (i.e. it is not whether the appeal panel might agree, or not, with the selection policy or selection decision in question). Per the panel in Belcher:

“A decision may be open to challenge if, but only if,

That last conclusion is one that any Judge or Arbitrator has to approach with the utmost care. As I have already indicated, it is of fundamental importance that we should not substitute our own judgment on the merits for those of the selectors – i.e. who would we have selected, or who is the better athlete or has the better performance figures and so forth. So long as selectors apply policy properly, and do so honestly, fairly and reasonably, and take account of relevant facts (they being best judged to decide what is relevant and what is not), then their decisions must be accorded the utmost respect.”

Successful challenges to GB championship selections have accordingly been relatively few, and now date back two Olympic cycles. In Roberts v British Swimming (SRUK, 16 June 2012) the appellant athlete (and 11-time Paralympic gold medal winner) succeeded in establishing that the British Swimming selectors had not taken into account certain relevant criteria, including the athlete’s previous illness and injuries and their consequent effect on performance, when selecting for London 2012. The appeal panel held that the relevant information was “obviously given insufficient weight in a way that was not within the ambit of reasonable judgment” and remitted the decision to the selectors for further consideration; albeit the eventual outcome on selection remained unchanged. In Great Britain Rhythmic Gymnastics Group v British Amateur Gymnastics Association (SRUK, 5 March 2012) the decision of the NGB (“British Gymnastics”) not to nominate a team in the Rhythmic Gymnastics Group event at the London Olympics was overturned, on the basis that British Gymnastics had failed to adhere to its own selection policy (in not recognising that the appellant Group had achieved the benchmark score set out in the policy and should thus has been afforded the nomination).[2] In Abbey Burton v British Shooting (SRUK, 17 May 2012) the decision of the British Shooting selection panel was successfully appealed in light of the panel’s failure to consider the athletes in contention against all of the factors identified in its selection policy, and the decision was remitted to the panel for reconsideration.

Such decisions now stand almost a decade old, and point to the scarcity of successful challenges to British selectors’ decisions. The infrequency of successful challenges reflects the difficulty highlighted by the appeal panel in Renshaw v British Swimming (SRUK, 30 June 2012), who reiterated the“well-established” jurisprudence on selection that “an appeal body should be very cautious about overturning a selection decision. It should do so exceptionally, where the flaw in the decision goes well beyond a mere disagreement with the merits of the selection decision made”.

Selection during a pandemic

The selection process undertaken by NGBs for Olympic Games is pressurised at the best of times, and – particularly in respect of widely-followed sports and better-known athletes – can be the subject of significant scrutiny, speculation and interest from the general public. The onset of the Coronavirus pandemic last year put paid to the 2020 Olympics as planned and, in doing so, raised new and unprecedented questions for selectors in respect of selection for any rescheduled Games. To what extent should re-selection be considered (or should the existing, picked, team for 2020 remain in place, one year later)? How, if re-selecting, to account for any inequalities in training opportunities and/or funding caused by the pandemic? Should the process start afresh, with new Olympic trials? Or a hybrid system, combining previous scores with more recently acquired (2021) data?[3]

Different British sports NGBs have opted for different approaches. As early as April 2020, British Sailing confirmed that its selected team for Tokyo 2020 would remain the same for any rescheduled Games in 2021.[4] British Swimming recently announced revisions to its selection policy for Tokyo 2021, inter alia moving to a 2-phase qualification process (compared to a single Trials meet), comprising an initial selection based on individual medal-winning performances at the 2019 World Championships in Gwangju, followed by a deliberately expanded FINA qualification window (within which the British Championships will be held between 13-18 April 2021). Meanwhile, for the first time in 40 years, a standalone, one-off British Olympic marathon trial will be staged by British Athletics, at Kew Gardens on 26 March 2021, and will determine selection for Tokyo.

The scope for ‘Covid’ challenges to selection?

Even with the onset of the Coronavirus pandemic, and the unprecedented situation that it has presented to athletes and selectors alike, the scope for selection challenge is, on the one hand, as narrow as ever. Any challenge to selection will still need to clear the established (high) hurdle invoked inter alia in Renshaw, in respect of an “exceptional” decision that “goes well beyond” disagreement with the decision of the selection panel and which instead falls under one of the categories identified in Belcher.

On the other hand, the genuinely unprecedented Covid-19 backdrop to selections and the corollary restrictions imposed on athletes’ ability to compete over the past year as a result of the pandemic, does raise interesting and potentially novel questions as to how new (or, indeed, unchanged) selection policies are to be evaluated if ever they were to come under challenge. In circumstances where NGBs have adopted revised and subjective, or discretionary, selection procedures that involve more than the objective ranking of athletes deemed to have met the requisite qualifying standard, it will be interesting to see whether athletes unhappy with selection decisions look to appeal on the basis of an alleged ‘unfairness’ in the application of a selection policy for reasons relating specifically to the pandemic. Where athletes have been differently affected by the pandemic, whether in terms of Covid-restrictions hampering training opportunities, or by funding difficulties resulting from the unexpected ‘lengthening’ of the Olympic (and thus the funding) cycle, would it be reasonable for a selection panel to take this into account? Would it be unfair for them not to? The sheer unprecedentedness of the current Olympic cycle, and the additional year of blood, sweat and tears that athletes have invested in the training process, means that NGB selection is potentially more fraught this year than ever before.

NGBs would do well to avoid controversy and – ultimately – challenge by adhering to the same principles that ought to have guided selections before the onset of the pandemic: proper application of the selection policy as agreed and implemented by the NGB; consideration of all relevant factors and not irrelevant factors; and transparent engagement with athletes with clear explanation, at every stage, of the selection process being implemented. Adherence to these is likely to ensure that most selection decisions will be immune from challenge (if not, one suspects, from criticism).

The coronavirus pandemic has, in many ways, turned the world of sport on its head; but the fundamental principles that underpin robust and successful NGB selections – themselves central to Team GB’s success over recent Olympiads – arguably require more careful attention, in 2021, than in any previous Olympic cycle.

Ashley Cukier is a member of Littleton’s Sports Law Group and was last year named by Chambers & Partners as one of two “Up and Coming” Sports Law Juniors. He is a member of the Sport Resolutions Arbitrators and Mediators panel and has previously been instructed to advise British NGBs on their selection procedures.

Simone Mallett-Forde is a former track and field athlete and aspiring sports solicitor, who recently completed the LLM LPC with Distinction. She has participated in the Mishcon de Reya Sports Law Academy, LawinSport’s Mentoring Scheme and is part of Littleton’s Inspire Sports Law initiative.

The Littleton Sports Law Group runs the ‘Inspire Sports Law’ initiative, offering work placements and mentoring to athletes transitioning away from high-performance sport, and to those from under-represented backgrounds, interested in a career in Sports Law.

[1] For the significant increases in funding delivered by UK Sport’s ‘World Class Performance Programme’ since 1997 (when founded) see https://www.uksport.gov.uk/our-work/investing-in-sport/historical-funding-figures. For the Sydney Olympics in 2000 the UK Sport Programme delivered £58.9m in funding, across 13 sports. By the time of the Rio Olympics in 2016, the UK Sport Programme was providing funding of £274.5m, across 20 sports.

[2] A decision notable in particular for the detailed analysis of the policy in question was properly to be construed, and the – essentially contractual – principles for the purposes of construction (see para 35 thereof).

[3] According to Reuters, some 57% of the 11,000 athletes had already qualified for the Tokyo Games this year before qualification tournaments were scrapped as the virus spread in recent months (https://www.reuters.com/article/health-coronavirus-olympics-idINKBN21K2BC). It is for each selection committee to determine the extent to which previous qualifications and/or results ought to factor into selection for the 2021 Games. 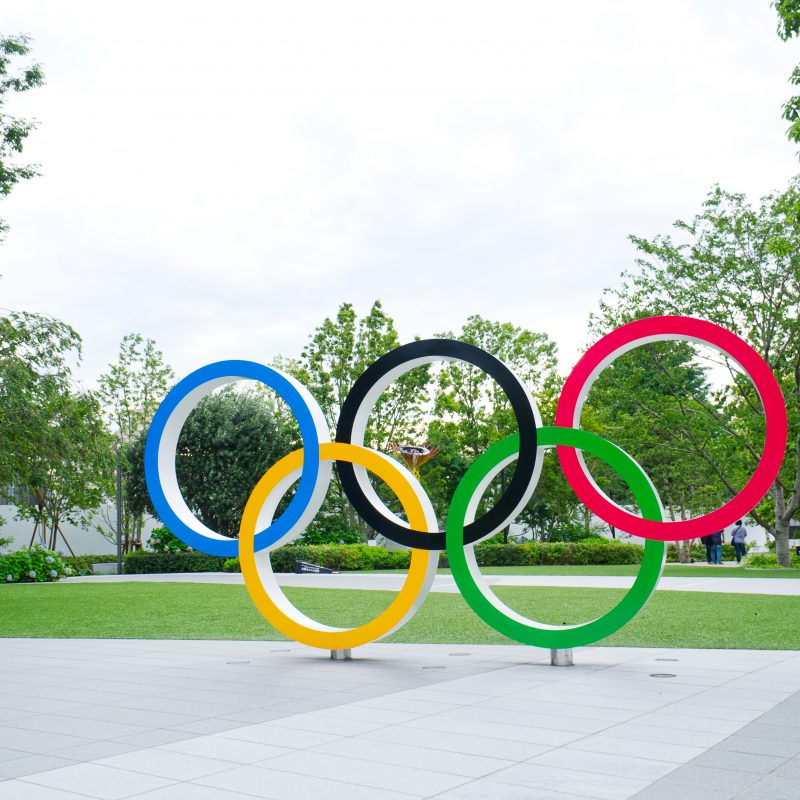